On 16 October, the award presentation ceremony of “CIC and China Re Group stretched noodle industry upgrade model restaurant (Beijing)” was held in Beijing, at which among others Ouyang Guangqi, deputy director of the Beijing Office of Qinghai Province, Zhang Geping, office director of the Party Committee of CIC, Ren Xiaobin, member of the Party Committee and vice president of China Re Group attended, and presented the award to Xiyu Yaxuan Beef Noodle Restaurant. At the award presentation ceremony, China Re Group signed a memorandum of legal assistance with the Beijing Office of Qinghai Province to help Qinghai stretched noodle operators to prevent legal risks and solve legal problems in Beijing. The Beijing Branch of China Continent Insurance presented a complimentary public liability insurance package for the model restaurant with an aim to provide protection for the accident risks faced by the restaurant operators and eliminate the worries of the stretched noodle workers. 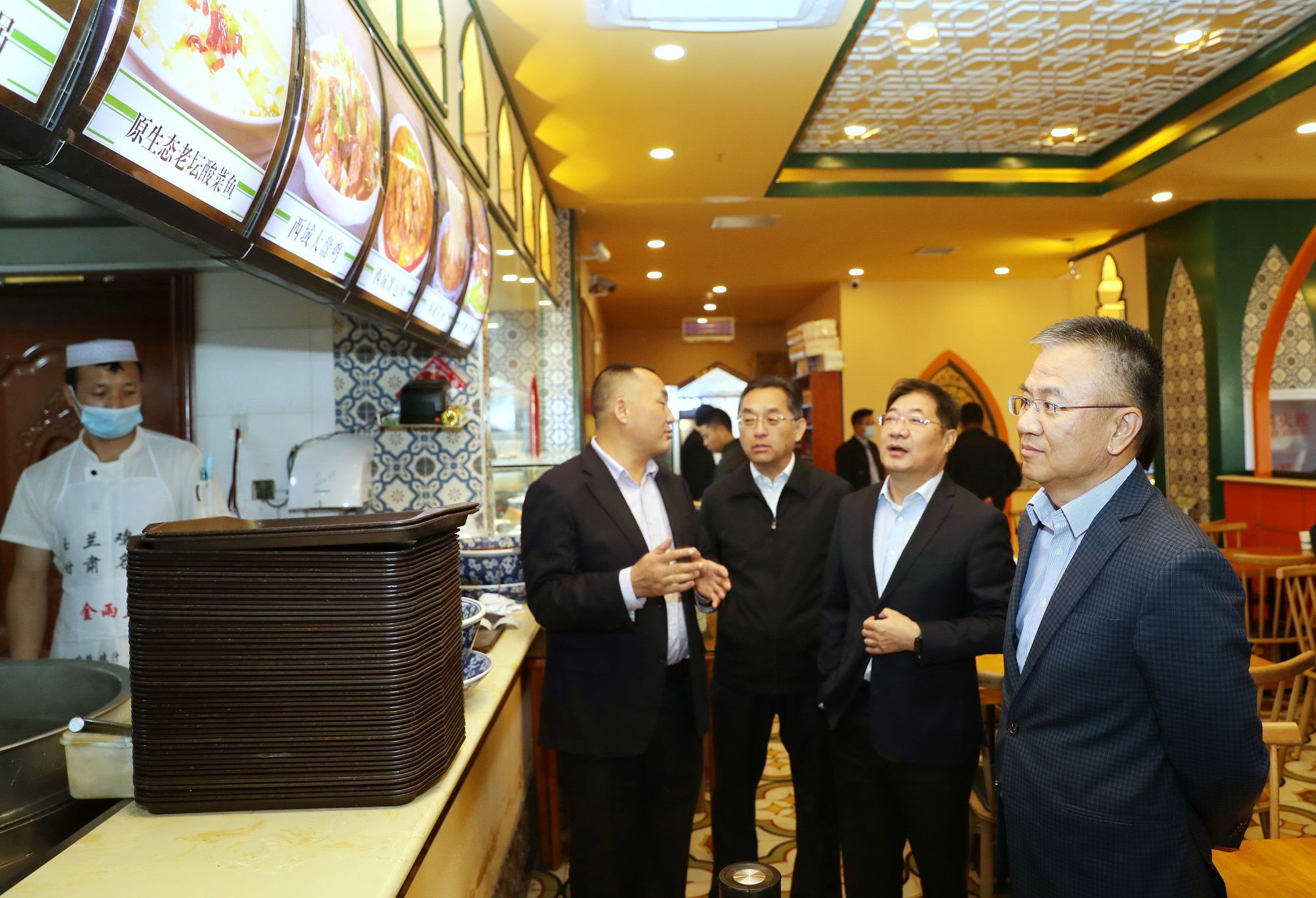 This is an epitome of China Re Group’s active role in serving Xunhua County since 2002, as a state-owned enterprise to fulfill its political responsibility and focus on fighting against poverty. In 2002, according to the arrangement of the State Council, China Re Group provided targeted assistance to Xunhua Salar Autonomous County, Qinghai Province (hereinafter referred to as “Xunhua County”) and helped Xunhua County shake off poverty in 2018 after years of hard work. Xunhua County is located in the Yellow River valley in the eastern part of Qinghai, with an average elevation above sea level of 2,300 meters. It is the only Salar Autonomous County in China, and also one of the regions with a small ethnic population identified by the State Council as one of the first key counties for poverty alleviation and key support development. It has a total population of 161,600. 93.5% of the population comprises the ethnic minorities. Among which, the Salar nationality accounts for 62.7%. After 18 years of targeted poverty alleviation efforts, China Re Group is determined to shoulder the political responsibility of assisting in poverty alleviation as a state-owned enterprise. While actively implementing the basic strategy of targeted poverty alleviation, China Re Group gives full play to the advantages of its main business of insurance and reinsurance, and explores a way of targeted poverty alleviation with China Re’s characteristics focusing on “poverty alleviation through insurance” and “stretched-noodle-driven economic development”. China Re Group actively supports poverty alleviation through building a strong poverty alleviation team. The Group has successively assigned nine outstanding cadres to take a temporary assignment in Xunhua. In particular, Wang Lei, who has been serving as deputy county head of Xunhua County and the first secretary of Dazhuang Village since 2016, was awarded the “National May 1st Labor Medal”. In 2017, the headquarters of the Group successively delegated four outstanding young cadres to station in Xunhua as the first line of defence in poverty alleviation. This year, the Party Committee of the Group selected three young cadres to take temporarily serve as deputy directors of the local brand industry service bureau and the development and reform bureau of Xunhua County in an effort to jointly promote the implementation of the Group’s poverty alleviation strategy.

Aiming at the key difficulty of “No Worry about Food and Clothing with Compulsory Education, Basic Medical Care, and Housing Guaranteed” program, China Re Group full capitalizes on the advantages of the principal business of insurance, with poverty alleviation through insurance as the core, and makes targeted compensation for poor people through insurance, so as to reduce poverty in a targeted manner, which greatly improves the scientificity and preciseness of poverty alleviation.

Driven by the “1 + N” targeted poverty alleviation model, Xunhua County was lifted out of poverty in September 2018, marking the first regional ethnic minority group in China to shake off poverty entirely.

After shaking off poverty in Xunhua County, stabilizing poverty alleviation and avoiding return to poverty have become the focus of the work. While earnestly implementing the instructions of General Secretary Xi Jinping’s “Four Don’ts” policy, CIC and China Re Group jointly devised and launched the “anti-return to poverty” insurance plan in 2019. There are four features of the plan. First, the insurance protection functions well to make up any deficits, which helps consolidate the poverty alleviation efforts. Second, it has a wide coverage which provides coverage to more than 60,000 people in Xunhua County, being the four categories of people who are likely to return to poverty there. Third, it offers comprehensive protection underwritten by means of portfolio insurance. Fourth, the plan can be extended and replicated in other regions and offers targeted, customized and effective insurance services according to the characteristics of different regions and people groups.

As of the end of September 2020, China Re Group offered more than ten billion renminbi worth “anti-return to poverty” protection to approximately 750,000 people over 98 villages (towns), 62 counties (municipalities) and 25 provinces (autonomous regions) including Gansu, Guizhou and Hebei, with claim payments exceeding RMB8.5 million, thus contributing to winning the battle against poverty through the “power of insurance”. 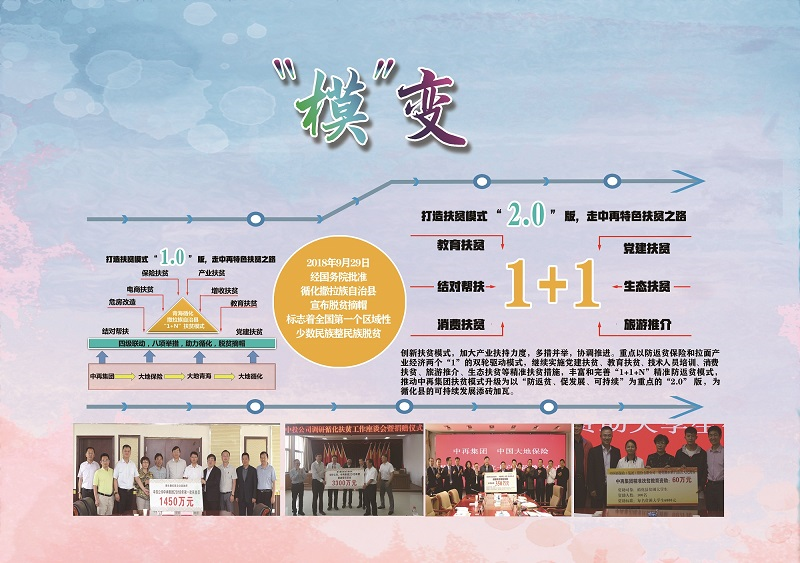 Xunhua has a longstanding history of stretched noodle boasting local flavors, which represents a key industry with the potential for standardization and branding, employs the largest number of people and generates the biggest revenue in Xunhua. Nearly 25% of the county’s population, representing 7,500 operators are engaged in the stretched noodle industry across China. The stretched noodle industry plays a significant role in driving local employment, revenue growth and targeted poverty alleviation. However, in core cities, Xunhua stretched noodle restaurant operators lack competitiveness and face limited development due to small-scale operation and fragmentation. At the same time, the restaurant operators face difficulties in obtaining financing and high costs.

Looking ahead, China Re Group will, while remaining true to its original aspiration and keeping its mission firmly in mind, continue to combine its advantages of the principal business with the industrial characteristics of the supporting regions; effectively connect poverty shake-off with rural revitalization; make comprehensive efforts in providing assistance through insurance, industries and intellectual education; drive and strengthen the “capital generation” function and the momentum of organic development; and strive to win the battle against poverty with greater determination and stronger efforts.